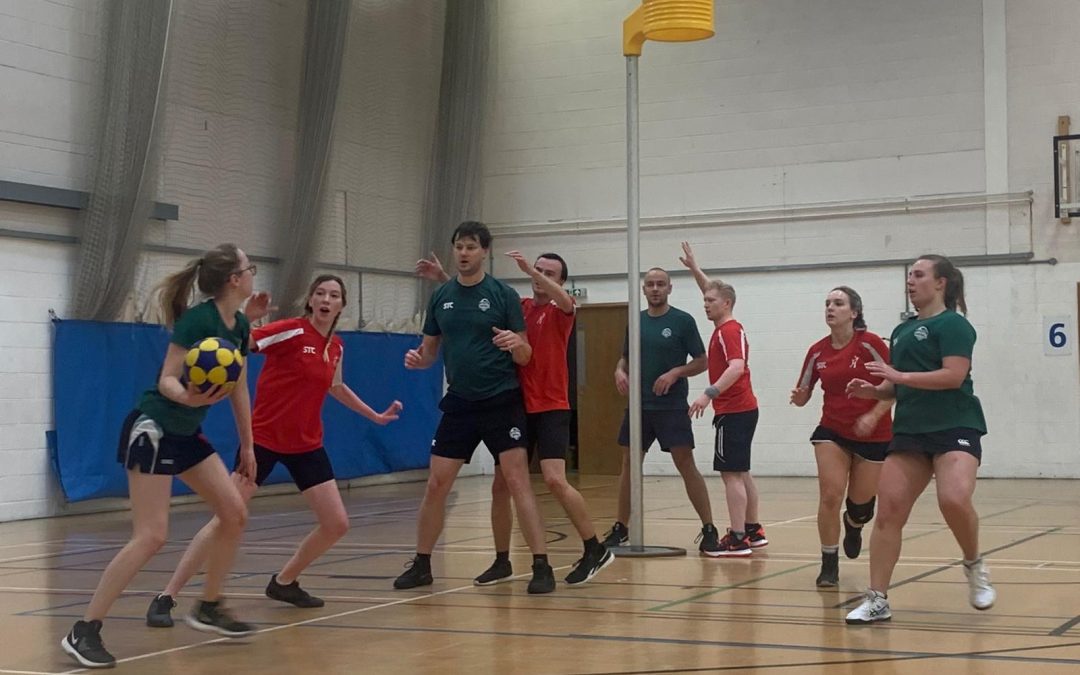 South London Korfball’s first team – Mitcham – squared off against north London’s Highbury 4th team. Hoping to follow on from the success of Balham team, this neck and neck game finished 13 – 13.

Highbury came out the gates flying, going a goal up in the first few seconds, following up with a goal from a feed quickly after.  Mitcham’s longest man, Edwin Huijberts showing his skills with a well-timed interception sent the ball into well worked attack but couldn’t net a goal. The ball came back quickly and a foul on a running shot gave Highbury a penalty that they put away. Sarah Broadberry took a well-timed shot that bounced out. Highbury scored a longshot and a drop off to make the score 5-0.

Never to be disheartened Mitcham rallied together and answered back with a drop-off masterclass from Matt Norman getting Mitcham off the mark. Nils Sundstrom scored from close and from long to help pull the score back to 5-3. Highbury weren’t done and they answered back with two quick goals of their own. Mitcham had found their range and scored two back to back longshots from Nils Sundstrom and Paul Franke. Alex Chaffey won a free pass which followed onto a penalty that she easily dispatched. Jess White decided it was time to show off with a monster rebound working the ball out to a textbook midrange shot. After Highbury responded, Nils added one more to his tally from range and Chaffey scored another runner to bring the halftime score to a tense 9-8 to Mitcham.

Highbury started the second-half the same as the first with high intensity and a quick runner. Paul scored a world-class longshot that would have been divine had it not been defended, however Edwin quickly showed him how it’s done. Flo Webb ran herself onto the scoresheet bringing the score to an advantageous 11-9 to Mitcham. Highbury dug deep to find their first half form with two runners and two long shots in a short period to steal the lead. Sarah took a free pass that tickled the top of the Korf before Sam won a penalty. Sam showed us all why he should practice penalties with his eyes open as it agonisingly bounced out.

Mitcham knew they deserved something from this game and in the last-minute Matt Norman scored two mid-range shots to rescue a final score of 13-13.